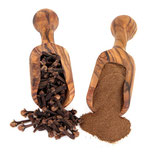 Cloves can be used in cooking either whole or in a ground form, but as they are extremely strong, they are used sparingly.

Cloves have historically been used in Indian cuisine (both North Indian and South Indian). In North Indian cuisine, it is used in almost all rich or spicy dishes as an ingredient of a mix named garam masala, along with other spices, although it is not an everyday ingredient for home cuisine, nor is it used in summer very often. In the Maharashtra region of India it is used sparingly for sweet or spicy dishes, but rarely in everyday cuisine. In Ayurvedic medicine it is considered to have the effect of increasing heat in system, hence the difference of usage by region and season. In south Indian cuisine, it is used extensively in biryani along with "cloves dish" and it is normally added whole to enhance the presentation and flavor of the rice.

In the US, it is often sold under the name of "chai" or "chai tea", as a way of differentiating it from other types of teas sold in the US.

In Mexican cuisine, cloves are best known as 'clavos de olor', and often used together with cumin and cinnamom.

Cloves Ground
Cloves can be used in cooking either whole or in a ground form, but as they are extremely strong, they are used sparingly.   Cloves have historically been used in Indian cuisine (both North Indian a ... (Read More)
From $4.90 2

Mace Ground
Mace was first introduced into Europe during the 11th century by Arab traders to flavour beer.  Mace and nutmeg are from the same fruit. Mace is the lacy covering of the seed, which is the nutmeg. They have different ... (Read More)
$16.50 2