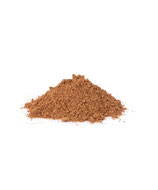 Chinese Five Spice blend is a ground mixture that is popular in Chinese cooking, especially Szechwan, Hunan, and Peking dishes. It is also called wu xiang fen in Mandrarin and phong pha lo in Thai. It is used in the Chinese influenced dishes of Vietnam Thailand Malaysia and Singapore. It has a pungent anisey taste with slight camphorlike notes, and it's colour ranges from a tan to gingery brown.

Foods get bitter if too much of the spice blend is used. The Chinese believe that the number 5 has curative powers, so this blend started its use as a medicine.

Chinese Five spice blend is made from Star Anise, Fennel, Clove, Cassia, and Szechwan Pepper. Black peppercorns can be substituted for Szechuan Pepper but not in our case.

Chinese Five spice blend is an important flavouring in hoisin sauce and other Chinese marindades for deep fried, roasted, grilled, braised, or barbequed foods such as pork, duck, chicken and other meats. It is mixed with red colour, Soi sauce and sesame Oil to create the popular Chinese roast pork called char siew. Five spice is mixed with salt and is used as a dipping sauce for roast meats, poultry, and raw or deep friend vegetables. The blend pairs well with rice wine, dired sherry, soy sauce, shallots, and garlic.

Peppercorns Green
Green peppercorns are simply under-ripe peppercorn berries. The green peppercorn is available dried, freeze dried as well as preserved in brine. The peppercorns have a mild peppery flavor and are used for pepper steak, or sauces and with ... (Read More)
$5.50 From $4.90 2

Chilies long red whole stemless
Since 2000BC chilli peppers have been part of the diets of Mayans and Aztecs in central Mexico and the Yucatan. The ancient Mayas and Aztecs used chillies as food and medicine and in religious rituals and ceremonies. Nowadays, t ... (Read More)
From $2.20 2

Nutmeg Whole Organic
Nutmeg has its origins in the Spice Islands of Indonesia. It is a light brown or greyish wrinkled seed inside a smooth, hard, blackish brown nut.   Nutmeg is used ground, grated or crushed. ... (Read More)
From $8.20 2

Onion Powder Organic
Onion powder is a spice used for seasoning in cooking. It is made from finely ground dehydrated onions, mainly the pungent varieties of bulb onions, which causes the powder to have a very strong odor. ... (Read More)
$4.50 From $3.90 2