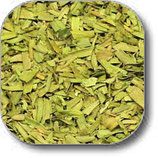 Corresponding to its species name, a common term for the plant is "dragon herb."

French tarragon is the variety generally considered best for the kitchen, but is difficult to grow from seed. It is best to cultivate by root division. It is normally purchased as a plant, and some care must be taken to ensure that true French tarragon is purchased. A perennial, it normally goes dormant in winter. It likes a hot, sunny spot, without excessive watering

Cis-Pellitorin, an isobutylamide eliciting a pungent taste, has been isolated from Tarragon plant.

In Slovenia, tarragon is used as a spice for sweet pastry called potica.

Tarragon has an aromatic property reminiscent of anise, due to the presence of estragole, a known carcinogen and teratogen in mice. The European Union investigation revealed that the danger of estragole is minimal even at 100-1,000 times the typical consumption seen in humans.

Like oregano, the leaves of tarragon are considred to be a source of 'warmth forces', and have been discribed as 'highly cordial to the head, heart and liver'. Tarragon was once believed to cure bites and stings from venomous insects and other small, belligerent creatures.

Onion Powder organic
Onion powder is a spice used for seasoning in cooking. It is made from finely ground dehydrated onions, mainly the pungent varieties of bulb onions, which causes the powder to have a very strong odour. ... (Read More)
$4.50 From $3.90 2

Garlic Powder
One of the more popular herbs, garlic has quite a colourful history. It originated in Central Asia, and records exist which show that garlic was used in the treatment of leprosy, amongst other things. Garlic was also common in the diet of Eg ... (Read More)
$3.90 From $3.50 2

Oregano Rubbed
Botanical name:Origanum vulgare ▪ Family name:  Lauraceae   Many subspecies and strains of oregano have been developed by humans over centuries for their unique flavors or other ... (Read More)
From $3.20 2

Garlic Granules mesh 40/60
Garlic granules, like their powdered cousin, are made of dried garlic that has been processed into a handy packaged kitchen spice. Containing no added salts or other spices,  garlic granules measure in the same way that garlic salt i ... (Read More)
From $3.50 2

Thyme Whole
History: Ancient Egyptians used thyme for embalming. The ancient Greeks used it in their baths and burnt it as incense in their temples, believing that thyme was a source of courage. It was thought that the spread of thyme throu ... (Read More)
From $3.20 2

Garlic Flakes
Garlic flakes represent a dried or dehydrated form of garlic, which has been minced or sliced into flakes previously. Garlic is also known under the scientific name allium sativum and it is related to other intensely flavored al ... (Read More)
From $4.00 2

Parsley Flakes
Botanical name:Petroselinum crispum ▪ Family name: Apiaceae   Parsley is traditionally a symbol of great strength, It was believed to have sprung from the blood of Archemorous, a Greek hero and the forerunner of death.   ... (Read More)
From $3.50 2

Sage Rubbed
Botanical name:Salvia officinalis ▪ Family name:  Lamiaceae    A wild herb from the Mediterranean, sage is known for restoring vitality to the body and is said t ... (Read More)
From $4.80 2

Rosemary Whole
Botanical name:Rosmarinus officinalis ▪ Family name:  Lamiaceae   In history, rosemary was believed to only grow in the gardens of righteous and virtuous people. ... (Read More)
From $2.50 2

Chives Roll Cut
Botanical name:Allium schoenoprasum ▪ Family name:  Alliaceae   The fact that Chives have been around since at least 300 ... (Read More)
From $4.00 2

Garlic Salt
Garlic salt is a flavored salt used as food seasoning made of a mixture of dried ground garlic and table salt with an anti-caking agent (e.g. calcium silicate). In its most basic form it is made by combining 3 parts salt and 1 part garlic po ... (Read More)
$10.50 2

Dill Tips
Dill is popular as a flavouring for breads, sauces, soups, potatoes, and pickles. In India it is used for treating gastric disorders.   Dill seeds and the Dill Tips posses diffe ... (Read More)
From $4.20 2

Marjoram Rubbed
Botanical name:Origanum majorana ▪ Family name:  Lauraceae   Marjoram is a herb associated with warmth, and it appears in mythology as being uplifted by Venus the sun. Historica ... (Read More)
From $2.75 2

Mint Rubbed
Botanical name:míntha ▪ Family name:  Lamiaceae   No meal of roast lamb would be complete without a liberal helping of fresh mint sauce (made with 2 tablespoons each of finely chopped mint leaves, b ... (Read More)
From $2.50 2